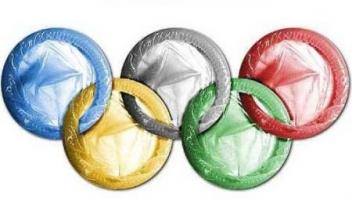 you are young, strong, heroic, athletic, full of energy, enthusiastic and excited about your life and your achievements. But you are human, like everyone else, and you are neither invincible nor omnipotent, not even on the competitive fields when you win trophies and medals. You are beautiful, your bodies are athletic and performing, even the Paralympics are examples of art in all ages, starting with our culture from Greece in the fifth century before Christ.

You have many opportunities in life to encounter and have sexual relations, even during competitions, hopefully after, and today I want to protect with this speech, at least I hope so. I want to protect you, your partner and your fans, explaining and insisting that you should always use the condom when you have relations with a man or a woman, regardless of your sexual orientation.

Your high social class, your economic situation over the media, interviews, newspapers, TV, autographs, increase your visibility probably also increasing your sexual promiscuity, you are obliged to protect yourselves if you have many casual relationships particularly with different partners.

We must not lie, many athletes, tells us the record, they do so voluntarily abuse of doping and other drugs, or they were induced by those who should protect you and guide you to the greatest possible result, not the myth of absolute victory at any cost. The sports competitions exalt but only champions and you live in this world, which forces the human limitations, in a strange mixture of joy, pain, anger, aspirations, but also contempt for themselves. One who uses doping or other drugs is despised when discovered, but basically despises himself, lacking confidence in his/her abilities and a real subtle psychological mechanism that the other side will make him/her seemingly omnipotent. This mix of emotions is dangerous.
This talk is open to all, just like the emotions that can affect anyone at any time, the effect can cause you to not use a condom when you have a casual or promiscuous relationship, whatever your orientation and gender may be.

The regular and proper use of the '' Condom '' is respect for oneself and for others, anyone who says otherwise is not informed, not mature, kills. Knowing well a person will not protect you from anything, whoever it is.

To consider oneself invincible, to think it is a problem of the others, just a homosexual problem, to be assured of the loyalty of the partner, all this omnipotence will most likely lead you to despise yourself for your mistake, only yours, for not having assessed the best ' 'situation' '. In addition to HIV, there are dozens of other sexually transmitted diseases like syphilis, gonorrhea, Chlamydia, genital herpes, human papilloma virus, hepatitis C that can arise without notice, even several months after unprotected intercourse, with the disarming ability to suffer not only the body but also the mind. A mind that is not peaceful, an aching body cannot make it to the maximum, your sports performance even unconsciously will be conditioned, just like an unwanted pregnancy could very much condition it.
You can't afford all of this.

71% of teens 14-24 years old do not use condoms because they believe they are safe from diseases.
You are young, not superheroes.

The organizations will provide during the Olympic Games and Paralympic free condoms, yet they are not used enough.
On the other hand you are the models, do not forget, and many of you also gain thanks to the sponsors, yet, the model of omnipotence shown to the public cannot understand the use of condoms and even orientation or behavior other than that of a male . The amazing thing is that it is you who built the model to which you conform or you aspire, but instead of producing an improved model of the average Italian subservient yourself to the worst.

It 's true that this happens all over the world, but things change, and in this we wish that Italy will become world champion, winning the medal in the use and promotion of the condom by all kinds of athletes of all kinds of sexual orientation.

You should be proud to be positive role models for change and be free to show your sexual orientation and your affection, protecting yourself and those you love, even if in promiscuous mode, making more use of the condom.
Sexual orientation is not what increases the risk of sexually transmitted diseases, but it is risky behaviors that increases exponentially the risk of infection. Every man and every woman responsible should bring along condoms whether he/she intents to have sex, beware of all those people who find condoms useless and uncomfortable, save their lives and above all save your life. If our partner does not respect us enough to contribute to the safety of the both of us , are we sure that sex is worth it?

In conclusion I want to expose three simple rules of safe sex to protect oneself effectively from most sexually transmitted diseases:
- Penetration always with a condom from start to finish.
- Do not take in your mouth and do not swallow sperm or menstrual blood.
- In case of itching, loss of smell, an abnormal color or pain in the genital area, contact a doctor immediately.